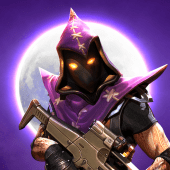 The average rating is 4.40 out of 5 stars on playstore.
If you want to know more about MaskGun Multiplayer FPS – Free Shooting Game then you may visit June Software Inc support center for more information

All the apps & games here are for home or personal use only. If any apk download infringes your copyright,
please contact us. MaskGun Multiplayer FPS – Free Shooting Game is the property and trademark from the developer June Software Inc.

Cross-platform 3D Multiplayer FPS game for IOS and Android with a new realtime presence system allows you play with your friends by joining them in a game.

Features
**********************************
– Free to Play as much as you want, no energy system
– Realtime Friends Presence system
– New Loadout to customize Gun, Armors and Masks with Patterns and Decals
– Two new Models including DeathMatch and Team Death Match
– Three new Maps including Yard, Office and Urban Conflict
– Complete Missions to Level Up
– Party up with friends.
– New Game Modes and Maps coming soon

“I quite like the first person shooter with the Masks. That was my favorite Game. It seemed so slick and so well done. ” –PocketGamer