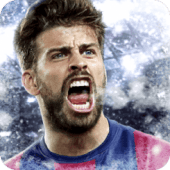 The average rating is 4.17 out of 5 stars on playstore.
If you want to know more about Golden Manager – Football Game then you may visit Kerad Games support center for more information

All the apps & games here are for home or personal use only. If any apk download infringes your copyright,
please contact us. Golden Manager – Football Game is the property and trademark from the developer Kerad Games.

Golden Manager is a free online soccer game with top real soccer players from the best major leagues where you will be able to create your own club and compete against users from all over the world in order to make history as a soccer manager. Manage new signings, training sessions, your team’s tactics and ticket prices. Enjoy live matches every day and decide on the changes to make, the intensity and the mentality of your team in order to defeat your rivals and make your team an unstoppable winning and goal-scoring machine.

Start with a basic team, become a better and better manager and do not stop until you have a top team! Place the highest bids in the auctions to get those players you think are indispensable for your game tactic. Make your team with the best eleven FIFA’s players and score amazing goals!

Have your team qualify for the major tournaments in Golden Manager: Champions League, Challenge League or Kerad Tourney. Just a few managers can exhibit these trophies in their Trophy Room!

– Free to play
– Multiplatform
– Sign real soccer players with FIFPro license.
– Get promoted in the League until you reach Golden categories.
– Train your team before each match.
– Exciting live matches against managers from all over the world.
– Major tournaments: League, Champions League, Challenge League, Kerad Tourney and GM Cup.
– Real sponsors to reinforce the finances of your Club: Nike and Coca-Cola.
– Connect to Facebook and overcome your friends in the ranking and tournaments.

If you think you can do better than Mourinho, Guardiola, Low, Van Gaal, Ancelotti or Luis Enrique, now is the time to show it. Create your soccer club right from scratch and demonstrate your talent as a manager. Configure the best team by signing Messi, Cristiano Ronaldo, Gerard Piqué, Rooney, Courtois, Dani Alves, Marcelo, Arturo Vidal, Gareth Bale, Iniesta, Pogba, Neymar, Luis Suárez, Kun Agüero, Cesc Fàbregas, David Silva, Alexis Sánchez, James Rodríguez or any other top player from the best FIFA clubs that you may consider indispensable to make your starting eleven unbeatable on the field and score more goals than your opponents!

Train your team before each match by strengthening the attacking, passing and defending skills that help your players defeat your rivals. Analyze your opponents match by match and choose the best tactic to counteract your rival’s qualities. When the time of the match comes, you will play at least one every day, manage the substitutions that can make the team improve minute by minute in order to achieve the victory. Decide on changing the mentality and intensity of your players to correct the different stages of the match. Make faster decisions than your rivals and show that your talent stands above the rest.

Tackle each match as if it was the most important so you will be able to achieve the targets set at the beginning of the season. Win the League, Champions League and GM Cup. Are you capable of winning the three in the same season? Just a few can do it but if you can, your friends will envy you and you will become the top manager! Your Trophy Room will be historic and you will be able to share it with the rest.

Start to make history in Golden Manager as a soccer manager!

An active connection to the Internet is necessary to play Golden Manager.