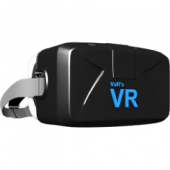 The average rating is 0.00 out of 5 stars on playstore.
If you want to know more about VaR's VR Video Player then you may visit After Breakdown Games support center for more information

All the apps & games here are for home or personal use only. If any apk download infringes your copyright,
please contact us. VaR's VR Video Player is the property and trademark from the developer After Breakdown Games.

VaR\’s VR Video Player is the ultimate VR player for virtual reality and 3D videos that gives you full control and supports all modes.

Configure any parameter of our VR player with its intuitive UI and get the most immersive virtual reality experience.

– VR Controls. Change any setting by looking to it in an immersive way.

– Subtitles support. Auto detect .srt files when they have same name than video file or browse for a specific one.

– Reset view option. Recenter camera to your current looking direction, a perfect way to watch movies no matter your position.

– Static and float modes for non spherical videos. Watch videos like a VR Cinema or without head tracking.