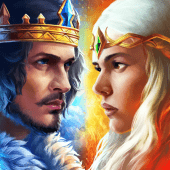 We provide Empire War: Age of hero 8.692 APK file for PC Windows 7,8,10.
Empire War: Age of hero is a free Strategy game.
Pcappswindows.com helps you to install any apps or games available on Google Play Store. You can download apps to desktop of your PC with Windows 7,8,10 OS, Mac OS, Chrome OS or even Ubuntu OS.Also you can download apk files for your phones and tablets (Samsung, Sony, HTC, LG, Blackberry, Nokia, Windows Phone and other brands such as Oppo, Xiaomi, HKphone, Skye, Huawei…).
Please be aware that We only share the original and free pure apk installer for Empire War: Age of hero 8.692 APK without any modifications.

The average rating is 4.40 out of 5 stars on playstore.
If you want to know more about Empire War: Age of hero then you may visit FT Games support center for more information

All the apps & games here are for home or personal use only. If any apk download infringes your copyright,
please contact us. Empire War: Age of hero is the property and trademark from the developer FT Games.

Empire War: Age of Heroes, the new Roman strategy MMO, is here! Are you ready to build an empire, wage wars against your enemies and command your troops in real time PVP online battles?

Recruit and train infantry and cavalry troops, research technologies and use diplomacy to ensure your survival. Form mighty alliances and fight together in combat. Play anyway your leadership style fits. Use strategy and tactics to give your army an advantage in combat. Outsmart your enemy and soon your city with rival Rome itself. Fight your foes, claim new lands and out of the flames of conflict, a leader will rise.

Join the fight with millions of other players worldwide in a true MMO wars game together. Chat and make friends and allies and rise from a citizen to become the legendary leader you were always meant to be. If you’re a fan of GOW, COC or the Hobbit, then this is the next wars game for you!

Ningsang Limbu – “Really Addictive. And it’s easy for me to win campaign for I’m good at diplomacy in Rome games.

-Free to play Roman strategy MMO wars game!
-Play with millions of other players worldwide.
-Control multiple cities and expand your territory. Conquer and occupy historical cities and the cities of other players. Bring your enemy and entire regions under your command.
-Recruit and train troops to develop your own strong Roman army – Infantry, Cavalry and Machinery. Send them on campaign to expand your control.
-Use diplomacy to further your campaign.
-Recruit strong general to help lead your army.
-Control your strategy and employ cunning tactics to gain the upper hand in PVP online combat.
-Research innovative technologies to increase your power and territory.
-Conquer and occupy other historical Rome cities to expand your realm.
-Take control of some of the strongest cities in the history of Rome.

Build a new empire in our all new real time, worldwide MMO!
Develop your city through construction and research. Produce resources that will allow your people prosper and further your campaign. Defend your people against your enemies from worldwide and conquer new Rome territory.

Wage online wars in real time!
Take control of your troops and use strategies and tactics to emerge victorious from epic PVP online campaigns.

Recruit Legendary Generals!
Recruit some of the strongest general with diplomacy in all of Roman history. Have them lead your army or act as your City Official.

Crash your enemies and fight together!
Forge mighty alliances with your friends worldwide and compete against the rest of the world.

Enjoy a beautifully realised Roman world!
The graphics, scenery and animations will transport you to another legendary historical age.

How to Play & Download Empire War: Age of hero App on PC Windows.